Schloss Moritzburg is a Baroque palace in Moritzburg which was built between 1542 and 1546. It was a hunting lodge for Moritz, Duke of Saxony. A Prince of the House of Wettin lived here until 1945 when the postwar Soviet administration evicted Prince Ernst Heinrich of Saxony. 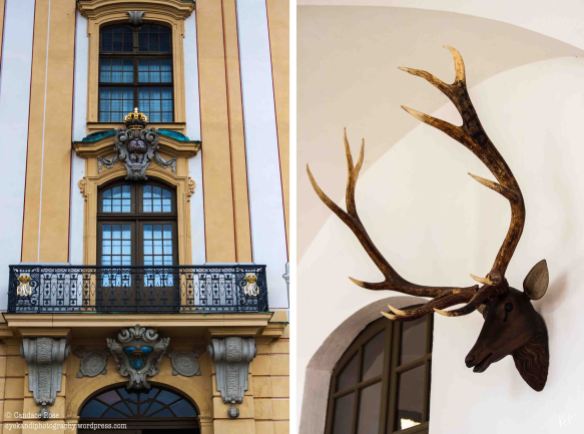 We only had an hour to walk around, so we didn’t take the tour, but there was plenty to see outside! Walking up to the castle is a treat and if you turn around, you will see a breathtaking view of the town.

The bright yellow makes the castle look cheery and the front is decorated with wooden deer heads with antlers mounted to them. There are 71 throughout the castle, most ranging from 270 to 400 years old! Most of them were purchased as gifts, but there is a 66-point red deer antler from an animal killed by Elector Frederick III of Brandenburg in 1696…which we did not see.

The statues are in the process of being cleaned, so some are dark and some look fresh and new. The grounds are kept immaculate and plenty of friendly Pomeranian geese waddled or swam over for a visit – and to see if we had food for them. We didn’t, and they soon went looking for the school children who were eating a snack on the lawn.

In 1972 Moritzburg Castle was one of the locations in the filming of the Czechoslovak-German Cinderella movie, Drei Haselnüsse für Aschenbrödel (“Three Nuts for Cinderella”), which is quite a popular movie in central Europe. Cinderella’s shoe is on display. Yes, we tried to fit into it. No, it did not fit any of us. (Which was expected!)

Cinderella is a fairy tale every little girl wishes would happen to her – a handsome prince will see past the rags, the less-than we’re told we are, and he’ll whisk her away out of the normal into the life of no need and love her forever. And the geese giggle.

As we left with ice cream cones in hand, the sun came out making the Schloss look even more striking! 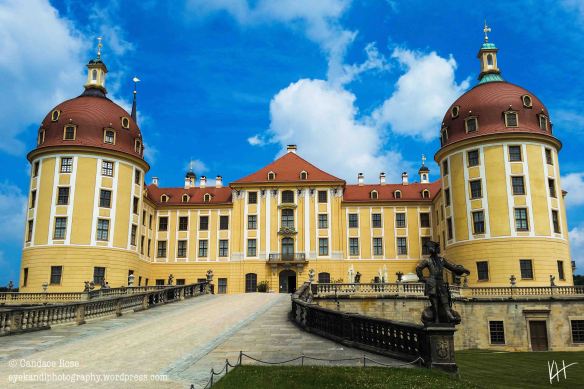 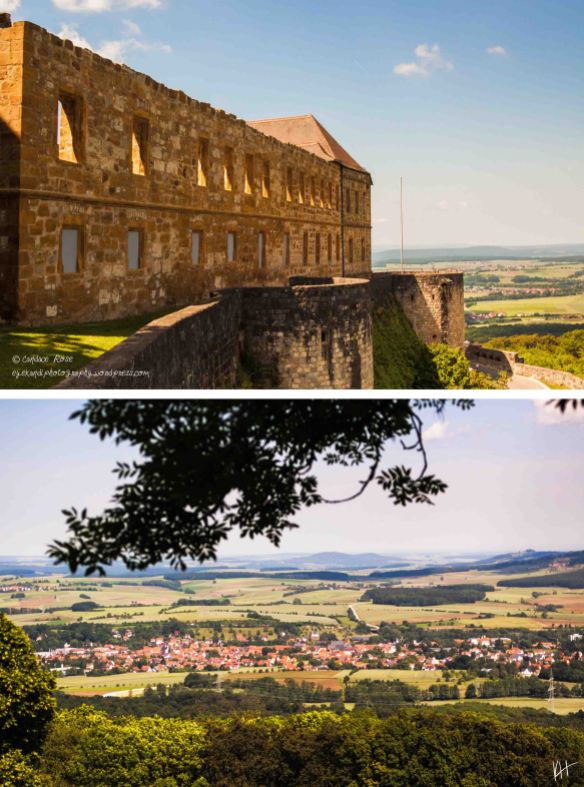 The Giechburg Castle is right outside Scheßlitz in Upper Franconia, Bavaria, Germany. It looks over Scheßlitz and the Bamberg region. Janet likes to call it The Topless Castle because the roofs were taken off in the Romantic Age.

The castle was first mentioned in writing in 1125, and came into the possession of the prince-bishops of Bamberg in 1390.

It as fun walking around there and seeing flowers growing out of walls and the 4290+ year old tree! 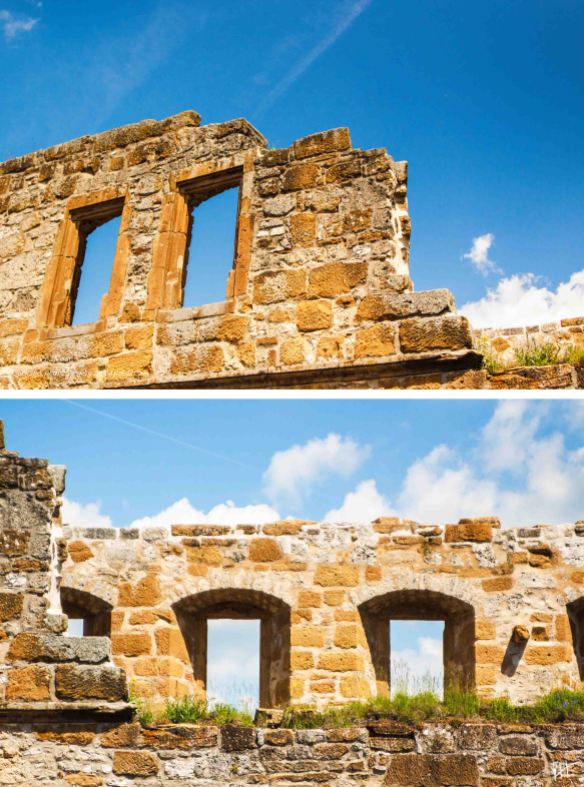 The 2011 Three Musketeers was filmed here at the Alte Hofhaltung in Bamberg…now I must watch it again! We walked past the old town hall, which was closed for renovations. 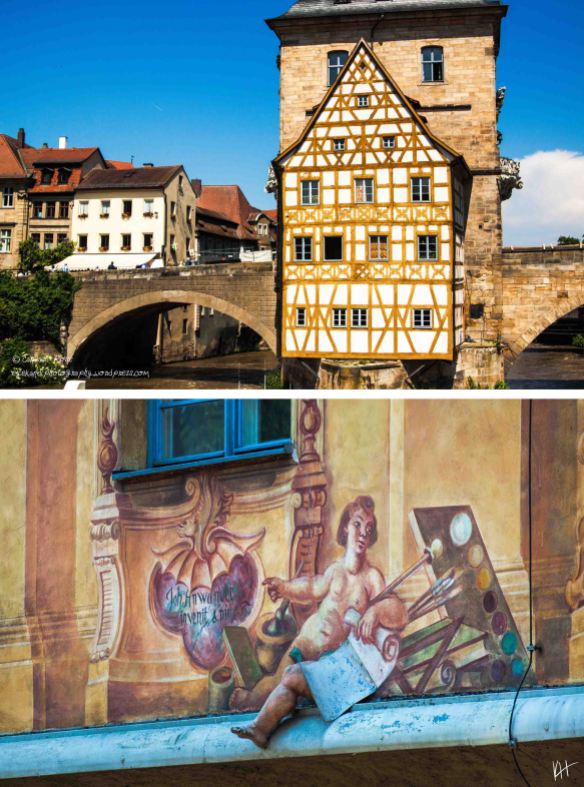 Interesting tidbit: In 1459 the first book printed in the German language was published in Bamberg.

“To commemorate the Jewish citizens and those who have done during the National – Socialist violent domination resisted, ignored, persecuted and murdered.”

The old town hall is opposite the Queen Kunigunda statue on the Alte Rathaus bridge; they are just down the road from the New Residence.

I wandered through the royal Rose Garden of the New Residence Bamberg, which was first created in 1703. In 1733 the garden was laid out the way it is today by designer Balthasar Neumann under the direction of Prince-Bishop Friedrich Carl von Schönborn. 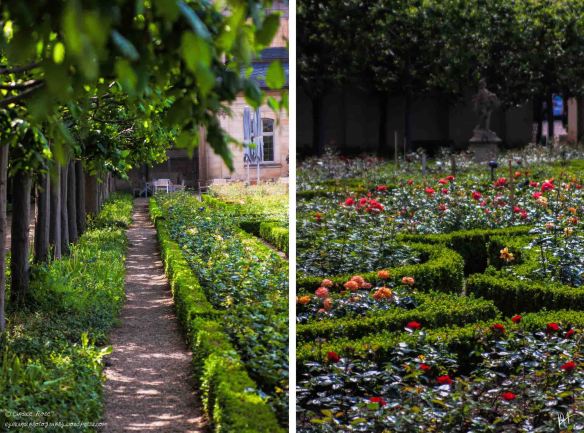 The sculptures were completed in the winter of 1760/61, but have been replaced by copies to preserve the originals. Some of the roses are the most beautiful I have ever seen. 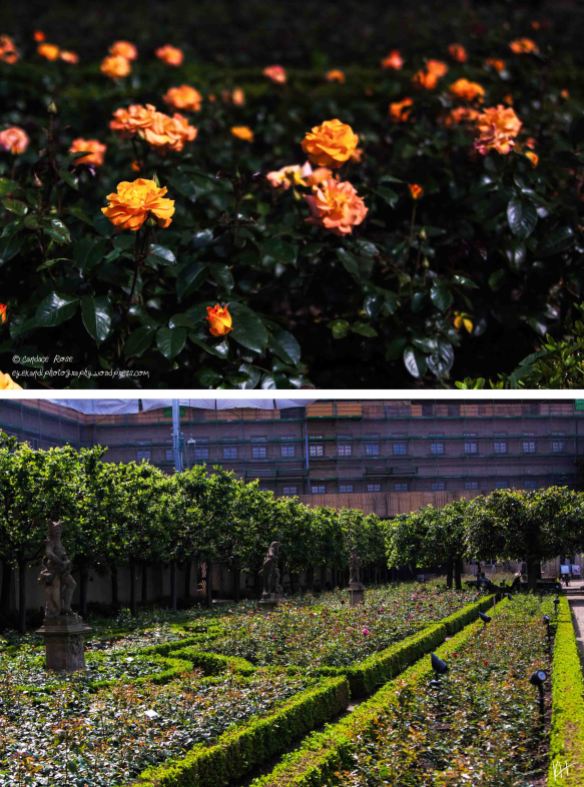 The garden is lined with lime tress and around 4500 roses bloom every summer!

There is also a wonderful view of Michaelsberg Abbey. 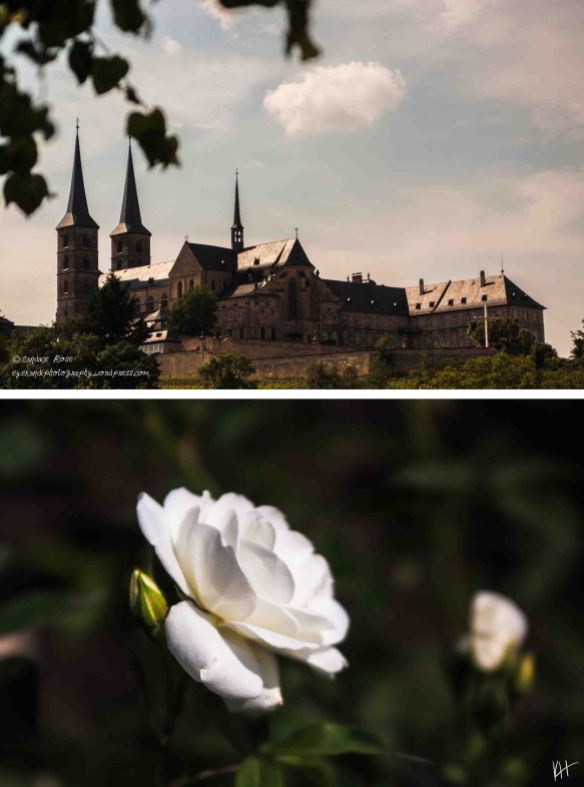 The Bamberg Cathedral (official name Bamberger Dom St. Peter und St. Georg) was completed in the 13th century. It is a late Romanesque building with four large towers. It was founded in 1002 by Emperor Henry II and finished in 1012. In 1081 it was partially destroyed, but was reconsecrated in 1111 and received its present late-Romanesque form in the 13th century.

The Cathedral took so long to be constructed that several styles were used in different parts of the cathedral: Romanesque, Gothic, and in the middle is the Transitional style; this is the style which is characteristic of the nave.

^ This is my favorite picture of my entire trip. It is like The Past shining light to show the way for Now and The Future. We can learn from Past (if we want to) and it will guide us to a better future. However, God MUST be a part of Present and Future for Past to guide in any way.

The Second Coming of Christ is a fresco in the apse of the east choir and was painted by Karl Caspar in 1927/28. In the west choir stands The Crucifixion of Christ; it is gold plated limewood plated and was created by Justus Glesker in 1649.

One more  treasure of the cathedral is an equestrian statue, the Bamberg Horseman (Bamberger Reiter). It was created around 1235 by an unknown craftsman, and it is unknown who the rider is, although there are many theories about that. You can read more about it here.

From the Cathedral’s brochure:
In Bamberg Cathedral, the central house of worship in the diocese of Bamberg, God is our opposite and our host. We are all invited to accept Him and His presence.

Space
created,
to save Him,
to touch Him,
to know He is with us.

We are creations,
He is the creator,
We are the people,
He is God.

Walking and enjoying the trails again after all the changes and upgrades which took place for the past several months did my soul good.